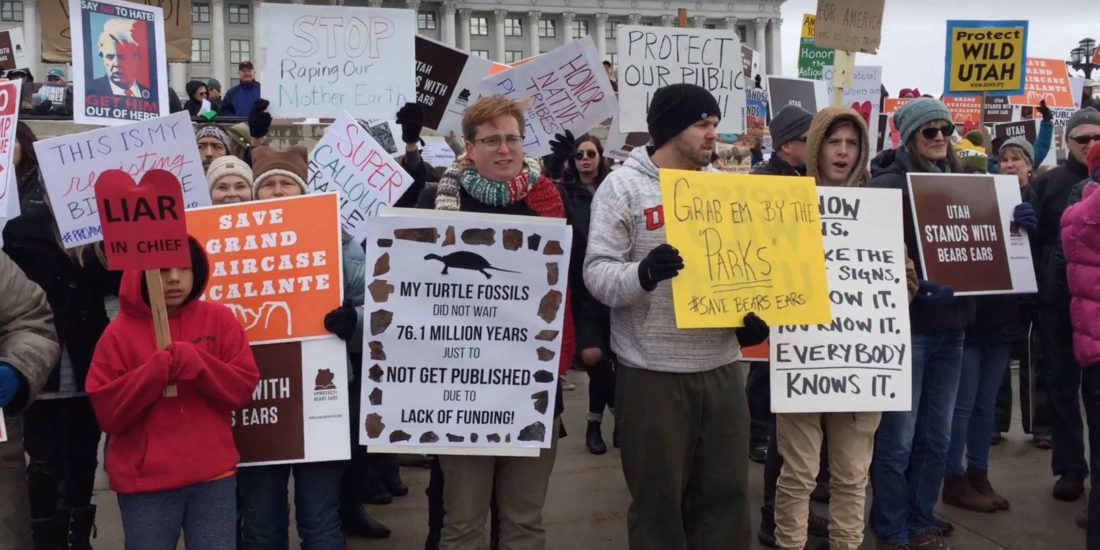 Trump visited Utah on Monday to announce a reduction of both the Bears Ears and the Grand-Staircase Escalante National Monuments.

Bears Ears National Monument will be sliced from nearly 1.35 million acres into an 86,447-acre Indian Creek unit and a 142,337-acre Shash Jaa unit.

Grand Staircase-Escalante will be cut back from nearly 1.9 million acres to three units — the 211,983-acre Grand Staircase, the 551,117-acre Kaiparowits and the 243,241-acre Escalante Canyons.

These are the largest reductions in protected land in the history of The United States. Trump argued that the monuments have led to “harmful and unnecessary restrictions” and that they were a result of Federal overreach, negatively impacting the local economy, hunting, and ranching. It didn’t take long for conservation groups to react, multiple lawsuits were filed just hours after the President’s announcement. The conservation groups, led by San Francisco-based Earthjustice — including the Southern Utah Wilderness Alliance and the Sierra Club, were apparently well aware of this announcement ahead of time due to various leaks from government officials in the White House. They’re of the opinion that the President lacks the authority to perform these actions under the Antiquities Act.

Trump is quoted as saying that “public lands will once again be for public use.”

Trump was accompanied by senators Orrin Hatch and Mike Lee. Both are apparently very happy with the President’s decision, based on various posts the Senators have made on their public Facebook profiles. Mike Lee has posted videos lampooning the Antiquities Act, pointing to it as an abuse of power. The Act was intended to allow the President to set aside certain valuable public natural areas as park and conservation land. It also allows the President to reserve or accept private lands for that purpose. The aim is to protect all historic and prehistoric sites on United States federal lands and to prohibit excavation or destruction of these antiquities. With this act, this can be done much more quickly than going through the Congressional process of creating a National Park.

Mike Lee is quoted as saying “President Trump did the people of Utah a great favor today by rolling back harmful land use restrictions in southern Utah. The president has done his part and now it is time for Congress to act to protect the people of Utah from federal overreach in the future. That is why I will be introducing legislation later this week that would give Utah similar protections from Antiquities Act abuse that the states of Wyoming and Alaska currently enjoy.”

Trump also toured the LDS churche’s Welfare Square and sat down with top church leaders in a meeting arranged by Senator Hatch. Trump reportedly praised the Church’s efforts in helping the needy around the world.

Although Trump was met with many supportive citizens at his speech, there were various protests throughout the valley, particularly in front of the Capitol, where thousands of protestors gathered and yelled at the President as he drove by along his motorcade route. There was also a confrontation between protestors and police in riot gear near 100 South and State street.

There will surely be more lawsuits in the coming weeks, and Trump has said new legislation will need to be passed to prevent the reduction being reversed by presidential candidates in the future.